What does my aircooled VW Chassis number mean?

What is a Chassis Number?

A chassis number or Vehicle Identification Number (VIN) is the unique reference number given to each vehicle that is manufactured. Just as people have birth certificates, names and national insurance numbers, so your vehicle has chassis number that should remain with it from beginning to end. 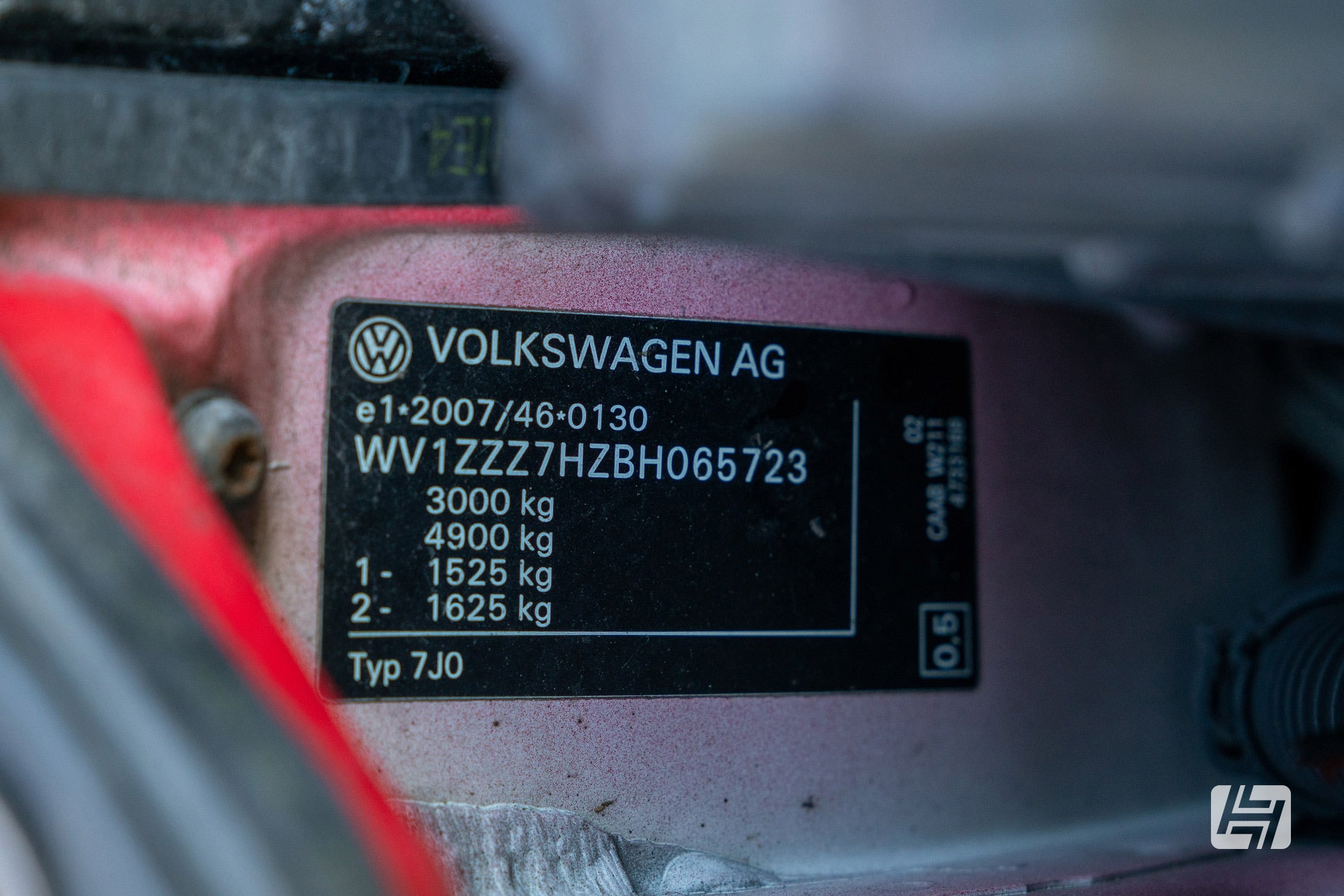 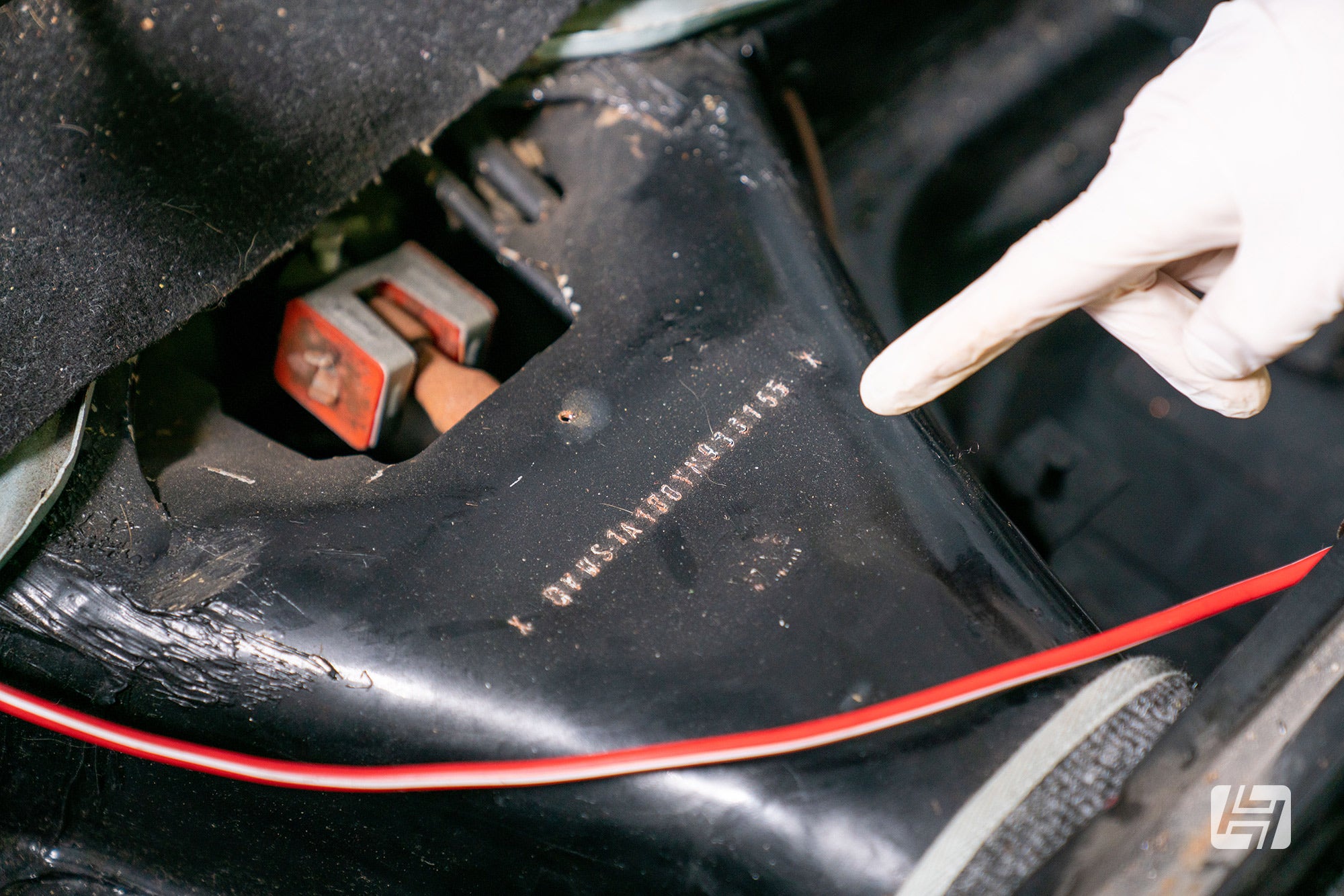 Where is my VW Beetle Chassis Number?

In the instance of a VW Beetle, the chassis number can be found on the VIN plate under the bonnet at the back of the spare wheel well next to the access plate for the shift rod. For owners of Super Beetle models (1302/1303), you'll find this next to the bonnet catch on the front valance. The chassis number is also stamped into the rear of the centre spine of the floorplan, under the rear seat. On late-model vehicles, a tag can also be found on the top of the dashboard, visible through the windscreen glass.  If your vehicle has been repainted, restored or customised your chassis number may have been moved or even discarded. 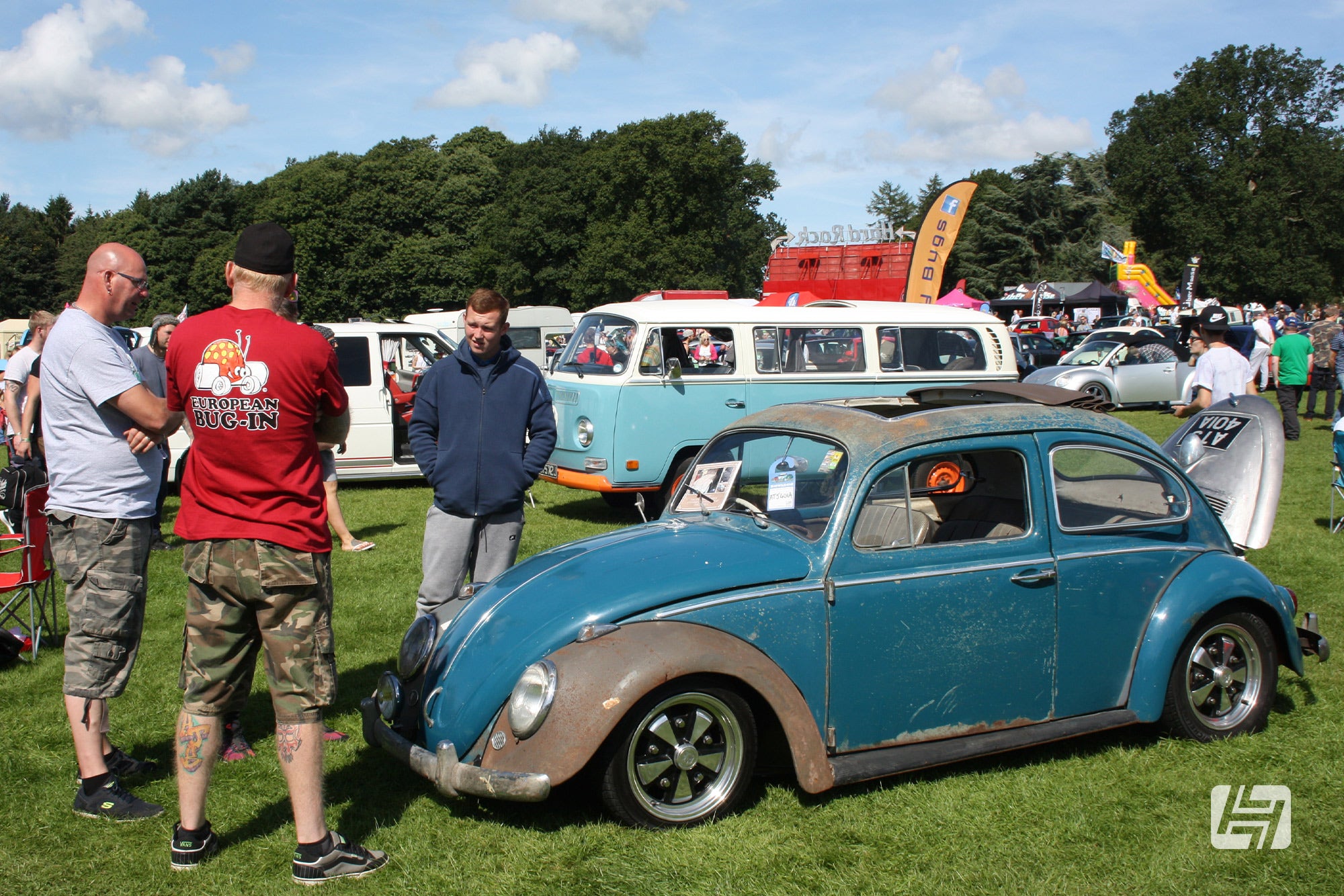 Where is my VW Type 2 Chassis number?

If you own a VW Split Bus you'll find a reference to your VIN in the engine bay and also from 1964 models onwards on the side of the central overhead ventilation box in the cab. For Baywindow owners, it can be found in the engine bay either above the gearbox on the right, or at the front of the rear valance on the left on later models. 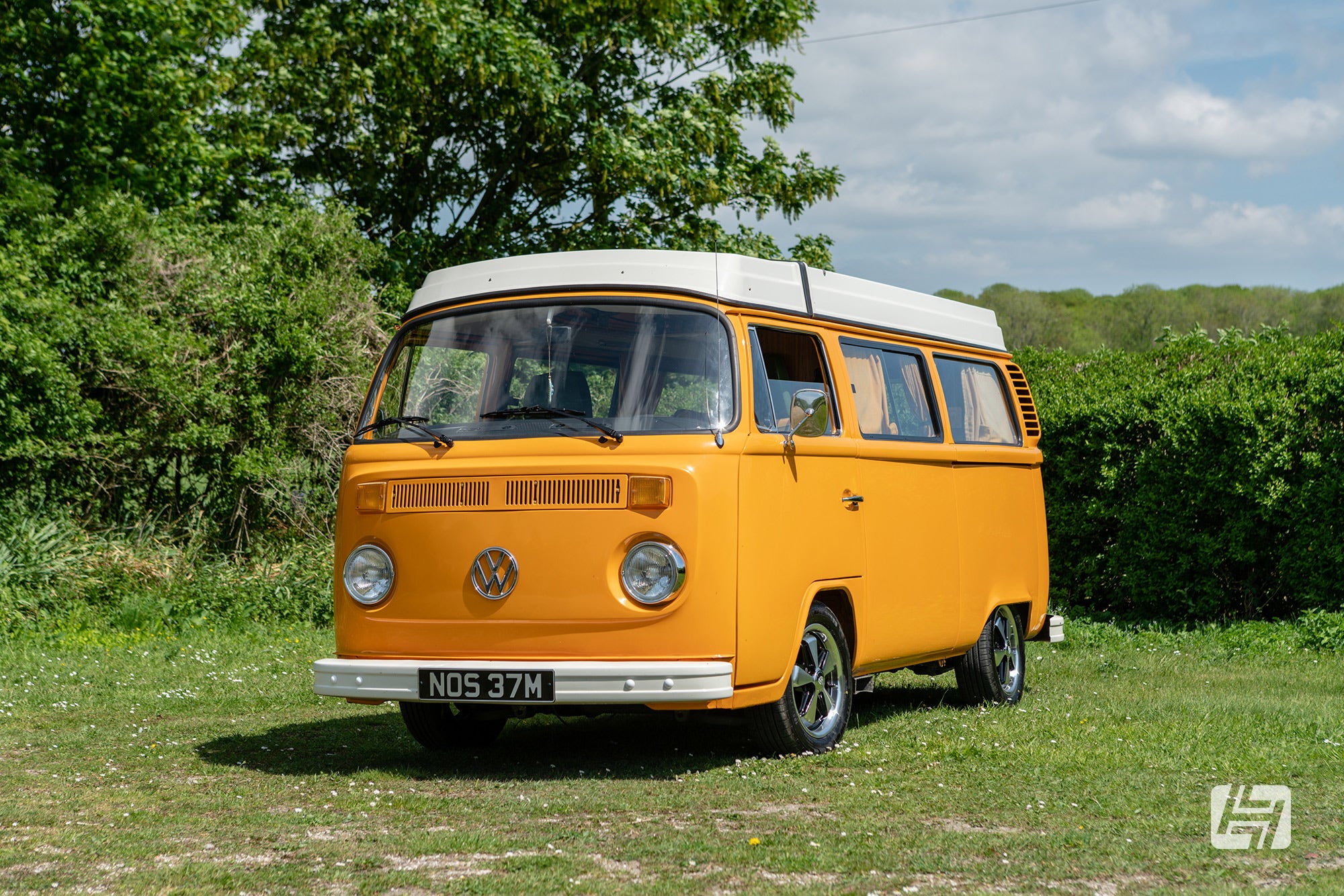 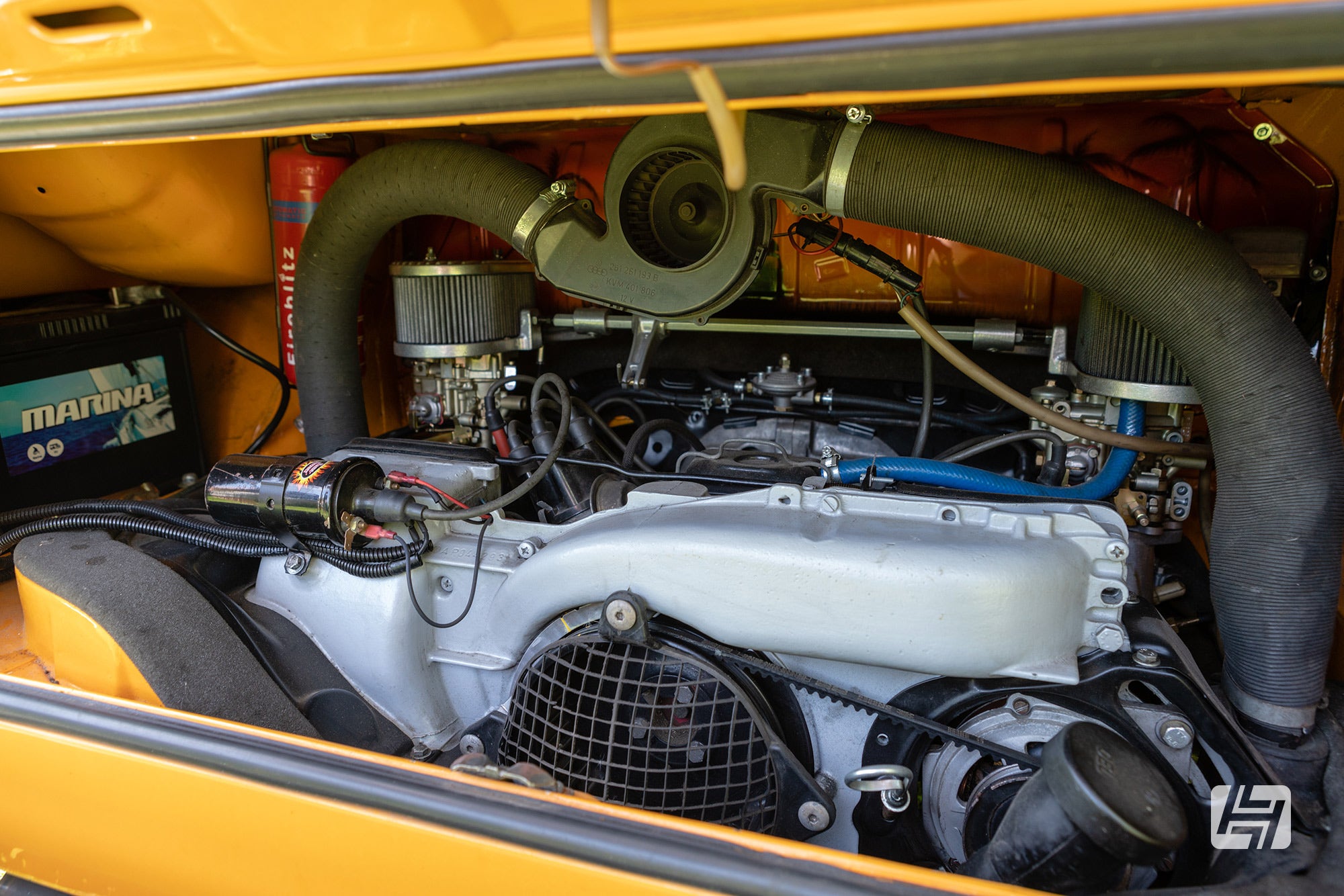 What does my aircooled VW Chassis number actually mean?

Your chassis number is a unique code given to your vehicle and will reveal when your VW was built. Using the following information you should easily be able to date your cars manufacture well enough for most parts cross-referencing. Should you wish to find out more detail, you'll need to apply for a VW Birth Certificate which will document the day of production, the colour and other options the vehicle was specified with from the factory. 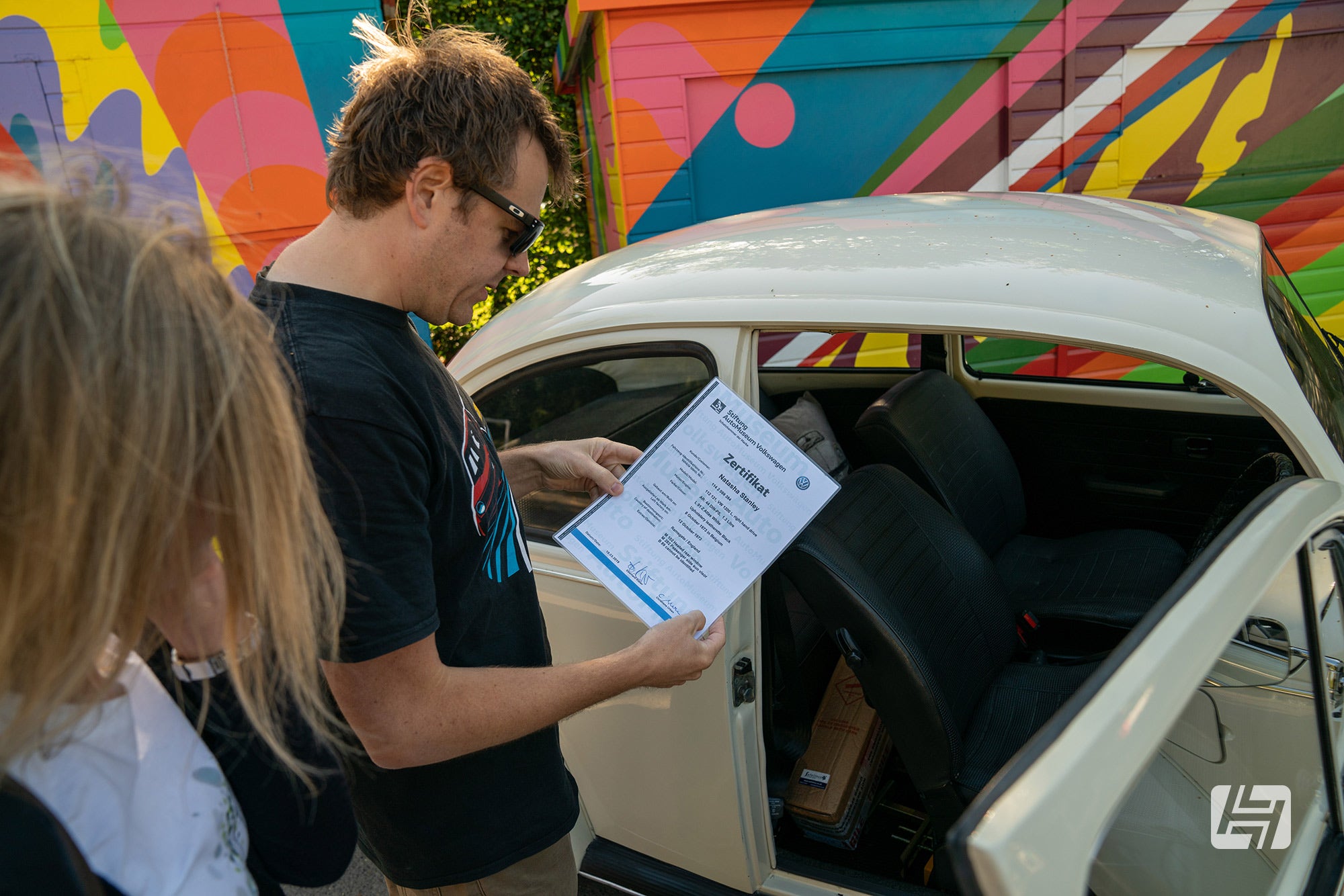 Can I find my chassis number on my registration documents?

For enthusiasts in the UK, you will be able to cross-reference your aircooled VW chassis number from the V5 registration document with what you find on the vehicle itself. Hopefully, these numbers match, although it isn't uncommon to find VW Beetles which have been sat on a chassis from another car. This will have typically happened at a time when originality was less important to the owner than the cost of the repair work required.

Decoding the aircooled VW Chassis Number (up to 1955)

Volkswagens initial chassis numbering system was a series of 5, 6 and eventually 7 digit numbers. These included a prefix with a dash to indicate the vehicle type: 1- for Type 1, 20- for Type 2. 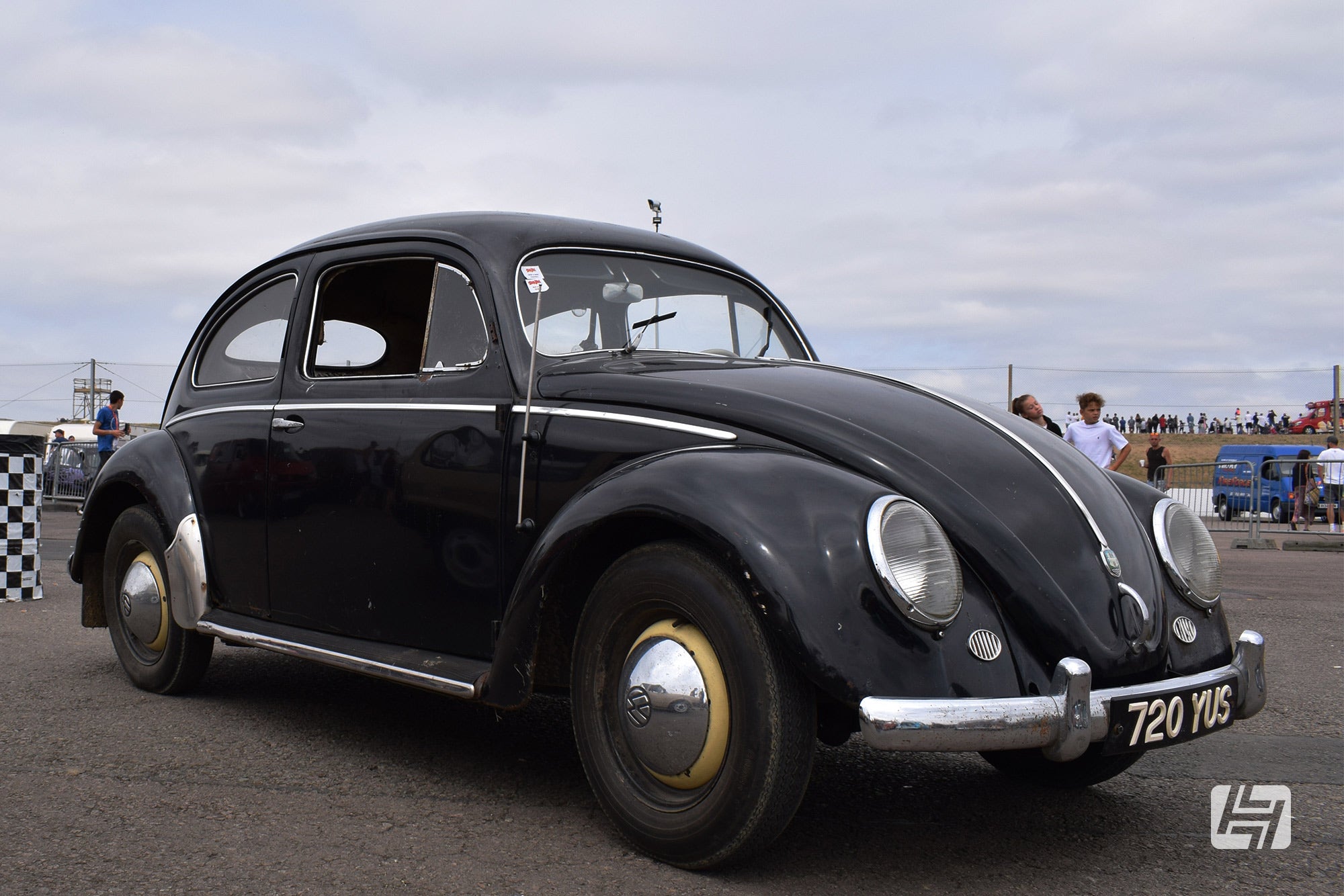 From January 1st 1956 the prefix digit disappeared and vehicles ran sequential chassis numbers. This can make it a little trickier to quickly reference a vehicle by the chassis number alone but fortunately, there are great reference sources online showing all the numbers in detail. TheSamba.com is one such site. 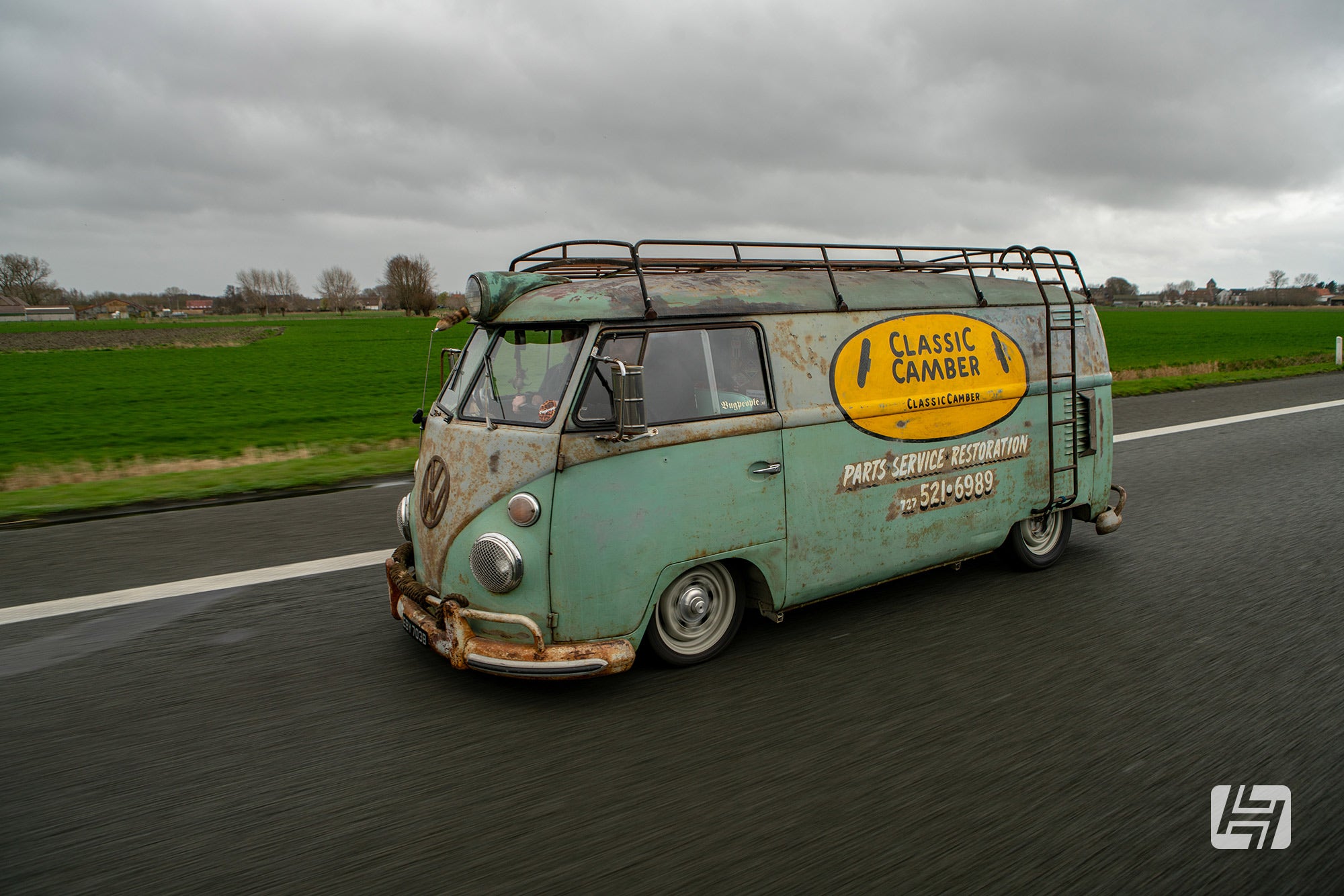 Volkswagen Beetle Chassis Numbers from 1965 on 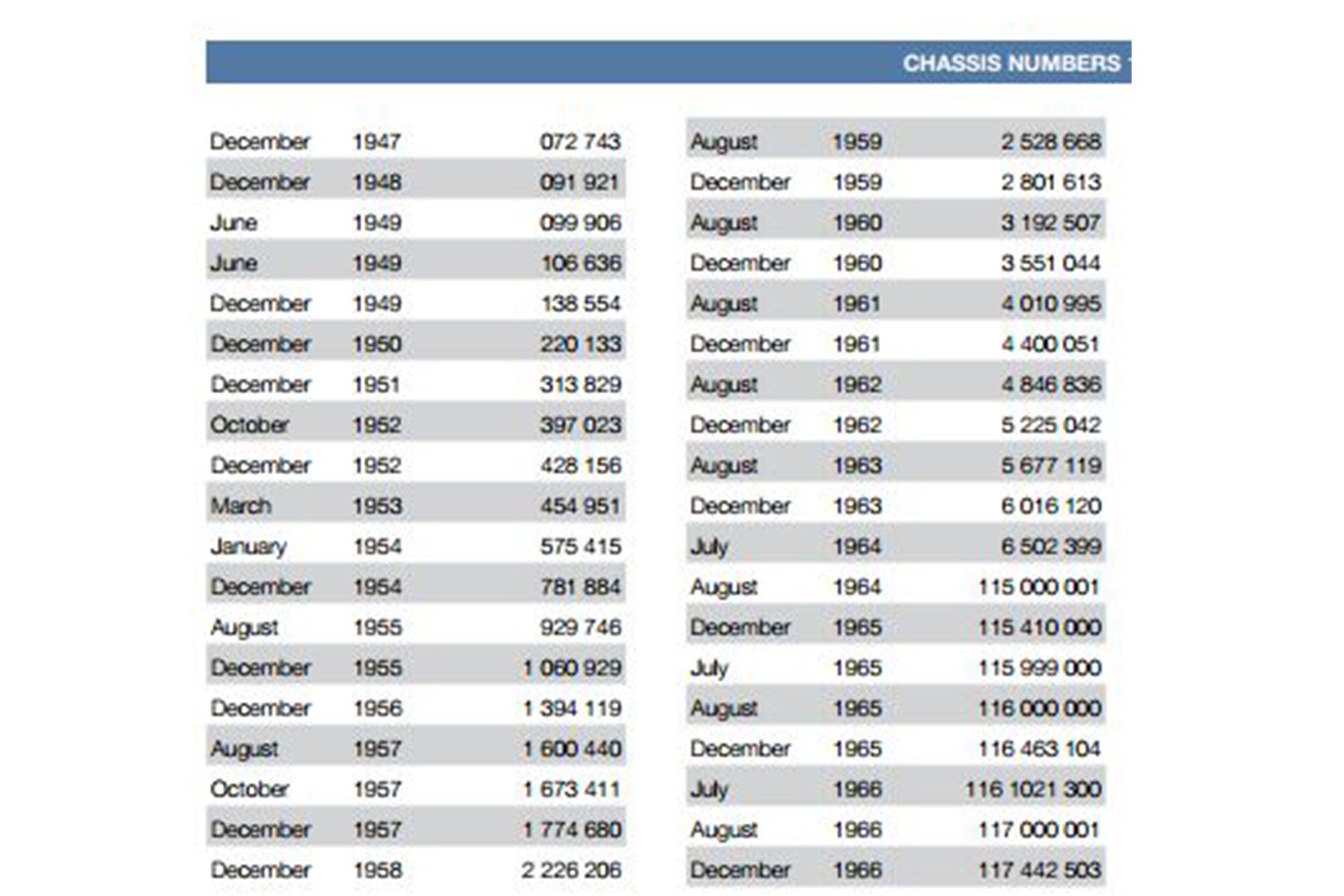 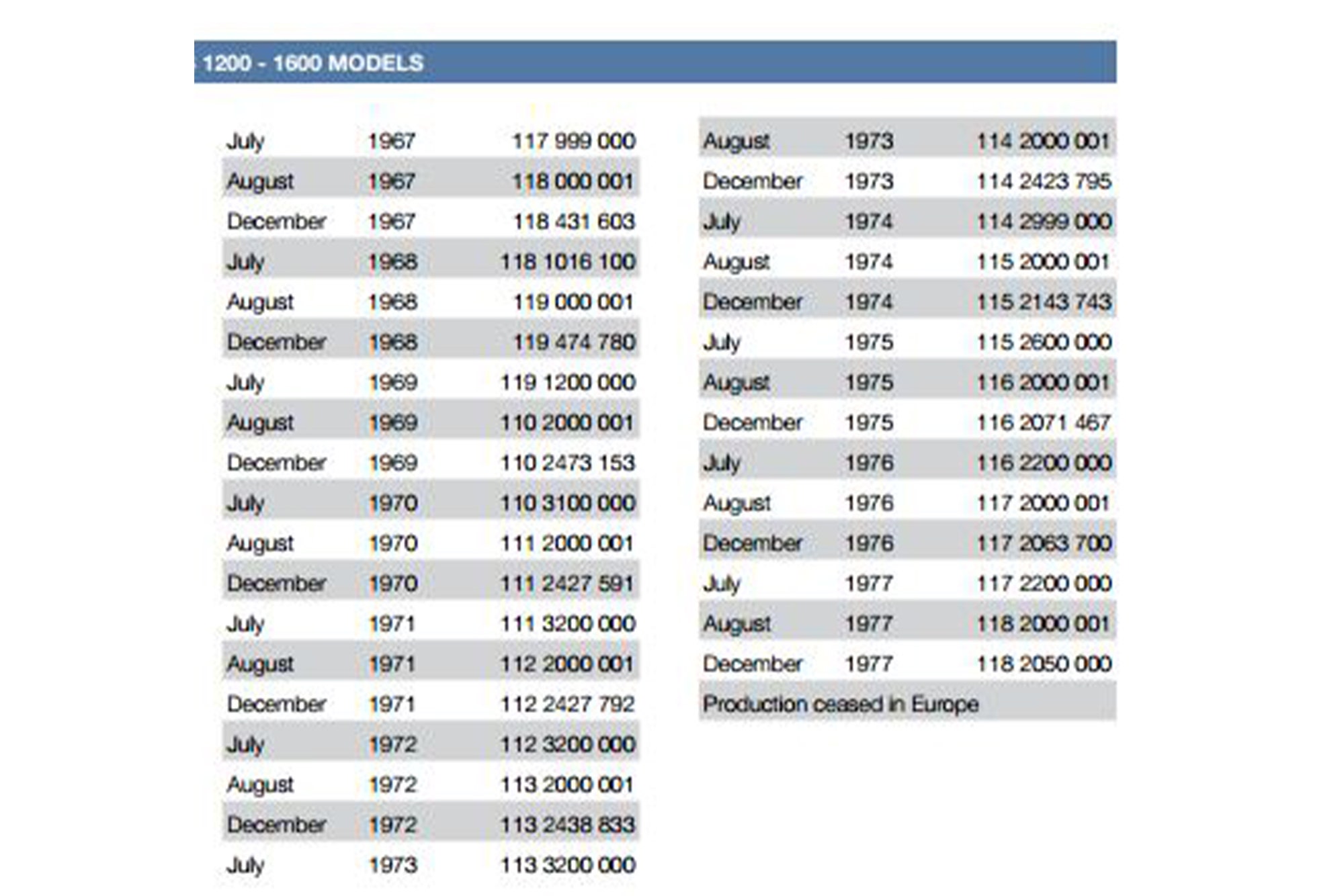 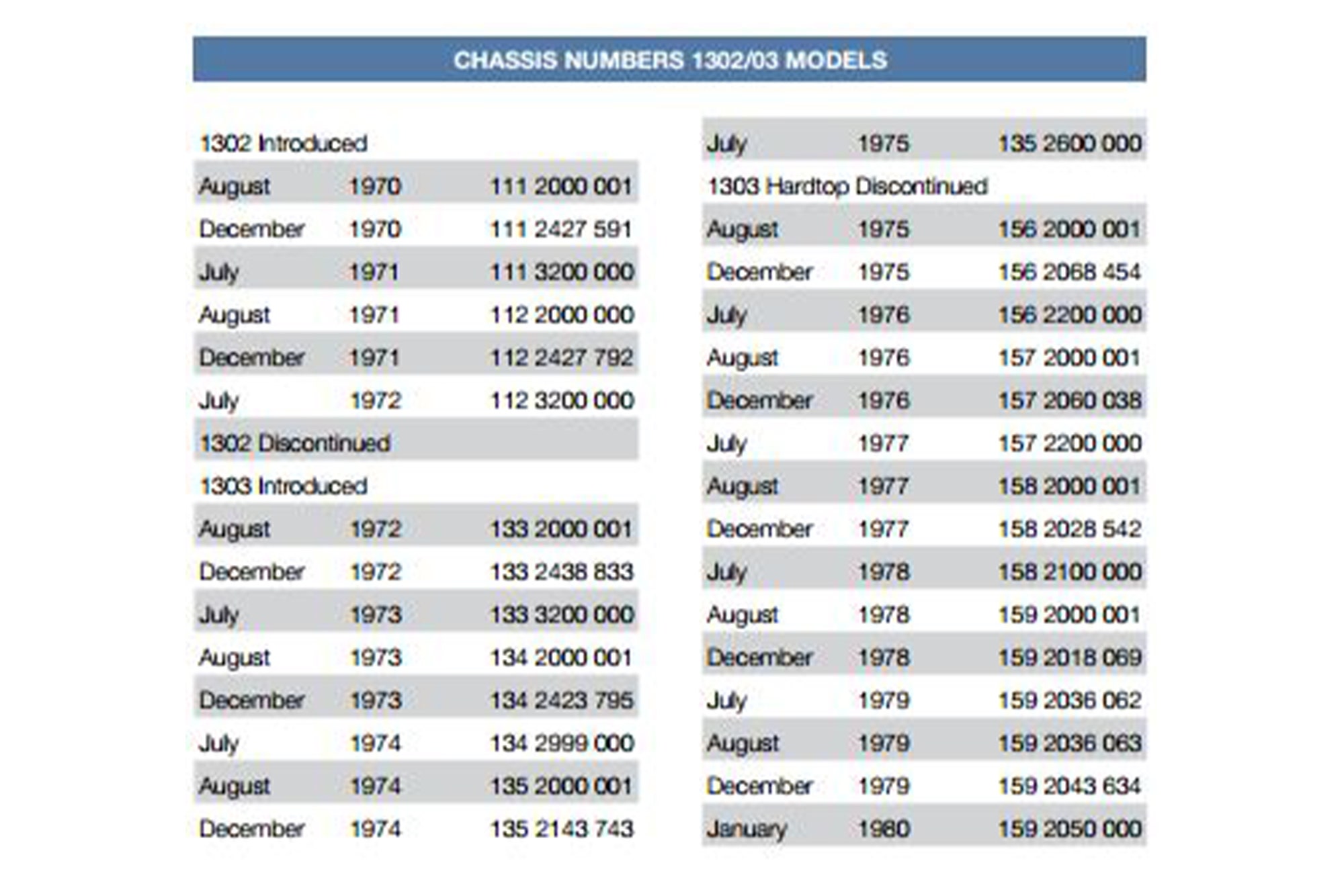 A special note to those looking at Super Beetle models. The 1302 continued to follow the same identification numbers as the beam axle vehicles, making it tricky (by number alone) to identify a 1302 saloon or cabriolet. The later 1303 however, adopted a 3 as the 'B' body type and from 1972 it was the only option for a Cabriolet model. 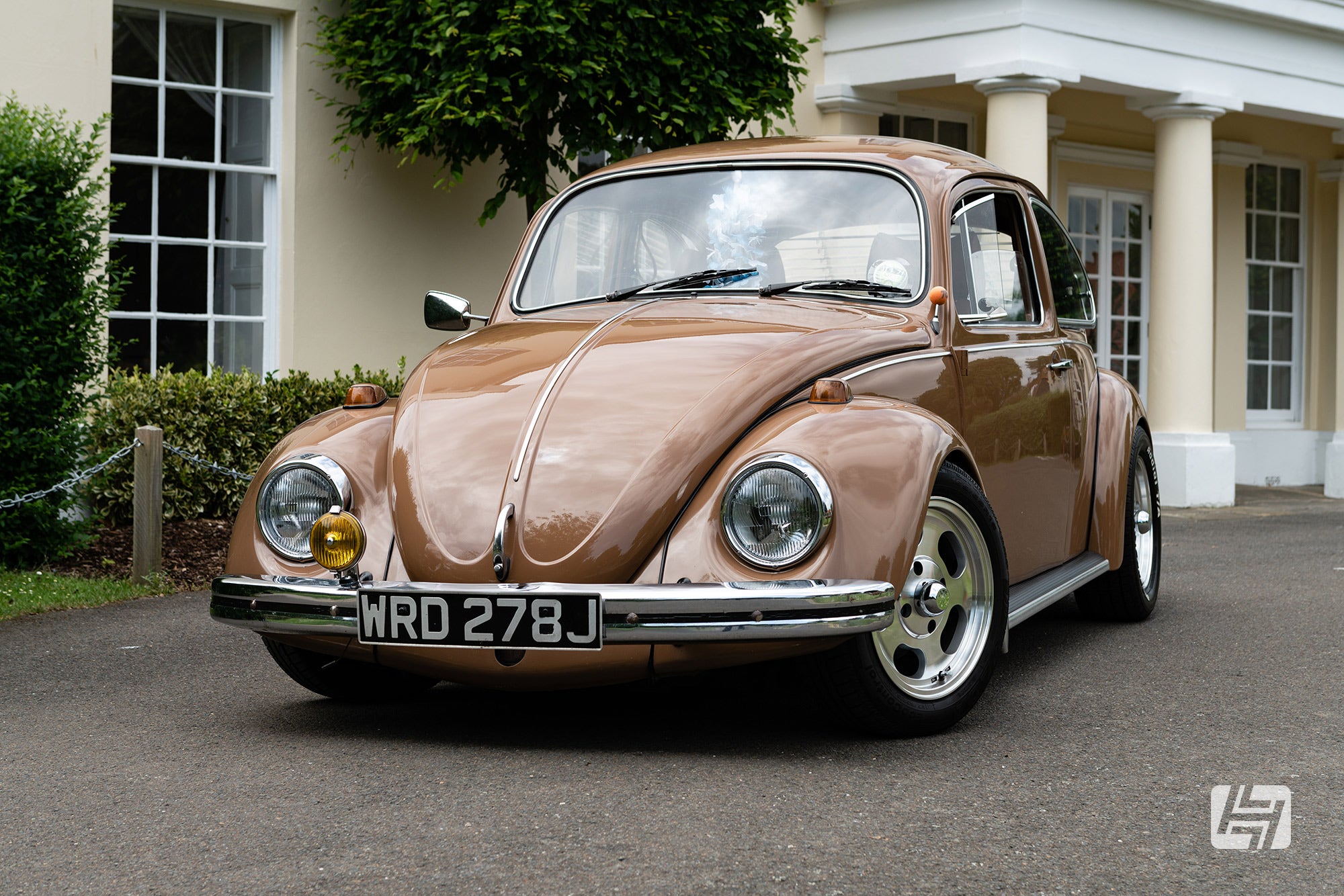 Volkswagen Type 2 Chassis Numbers from 1965 on

The Type 2 Chassis numbers work in a similar way to the Beetle, although these may hold less everyday importance as it is much trickier to swap a chassis over on a Camper or Bus. Below is a list of all Splitscreen Type 2 chassis numbers, as printed in our previous catalogues for reference. 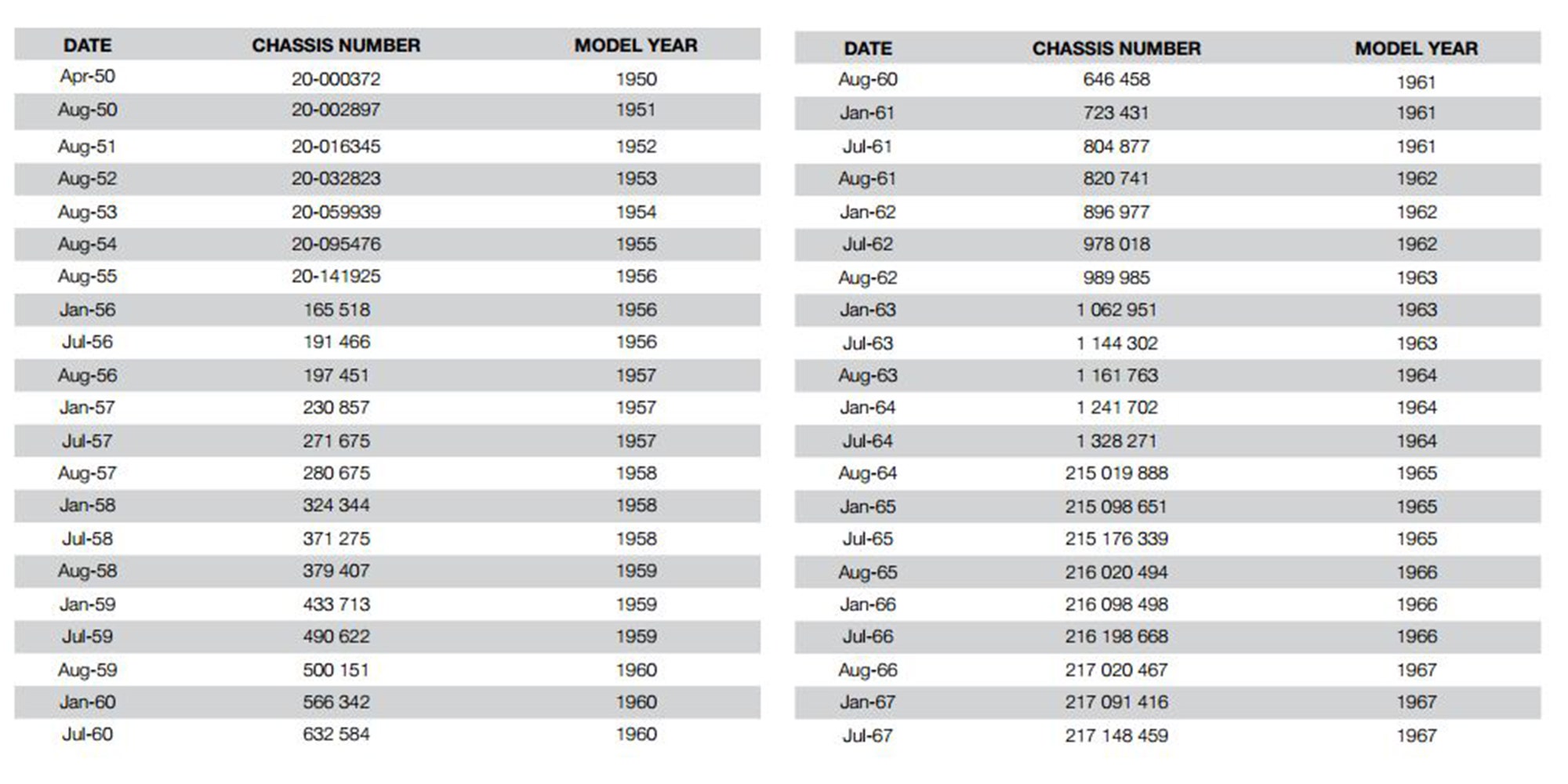 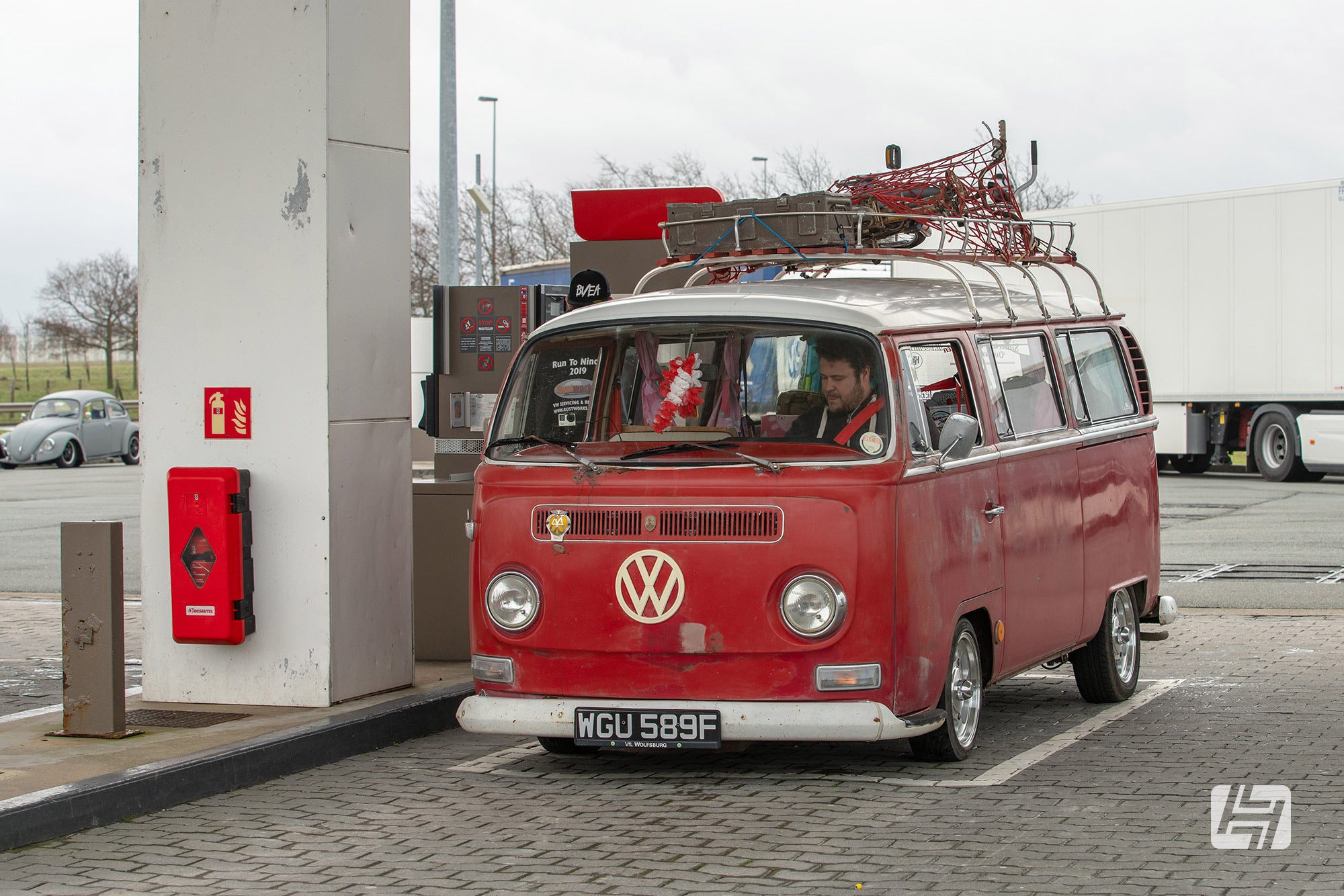 As we mentioned in the Karmann Ghia Buying Guide, there are a couple of versions of Karmann Ghia based on the Type 1 and the Type 3 chassis. The curved Type 1 based cars had sequential chassis numbers from their inception in 1955. However, in line with the rest of the VW range, they adopted the 'ABC method' from August 1964. These then read as A: 1 for Type 1 chassis, B: 4 for Karmann Ghia body type and C: the 3rd digit for the year, the remaining digits are sequential as the vehicles rolled off the production line. The chassis numbers, as previously listed in our printed catalogue are as follows. 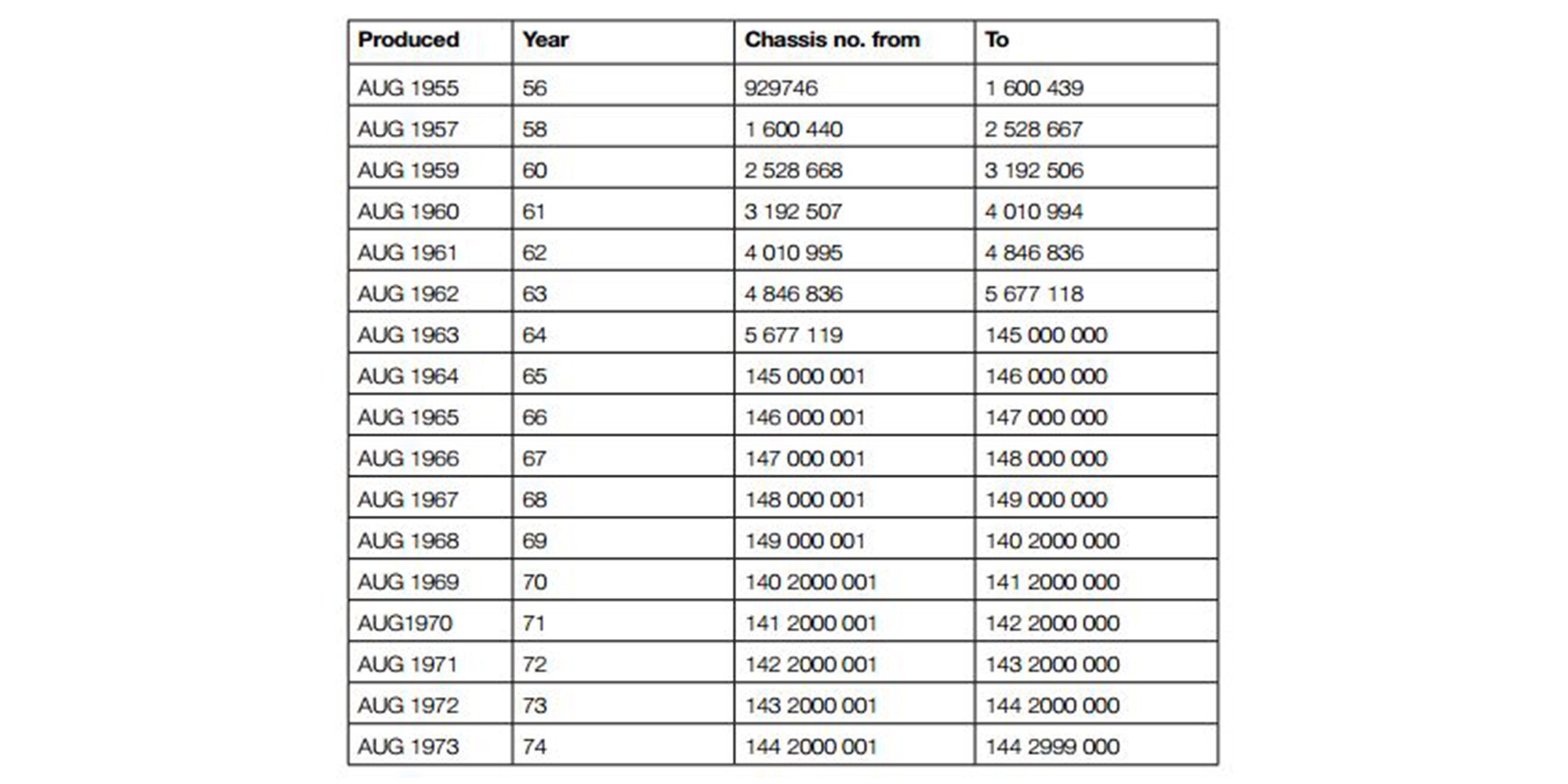 The Type 3 based Razor Edge Ghia is the same but starts with 34 for Type 3 and body type Karmann Ghia. This was followed by the relevant digit for the year and then consecutive numbers to show its place in the series.

The ABC details for the Type 3 made after August 1964 will follow the same pattern as the Beetle and Bus of the same era, except A will become 3. The same is true for the Type 4, simply substitute a 4 instead of 3. 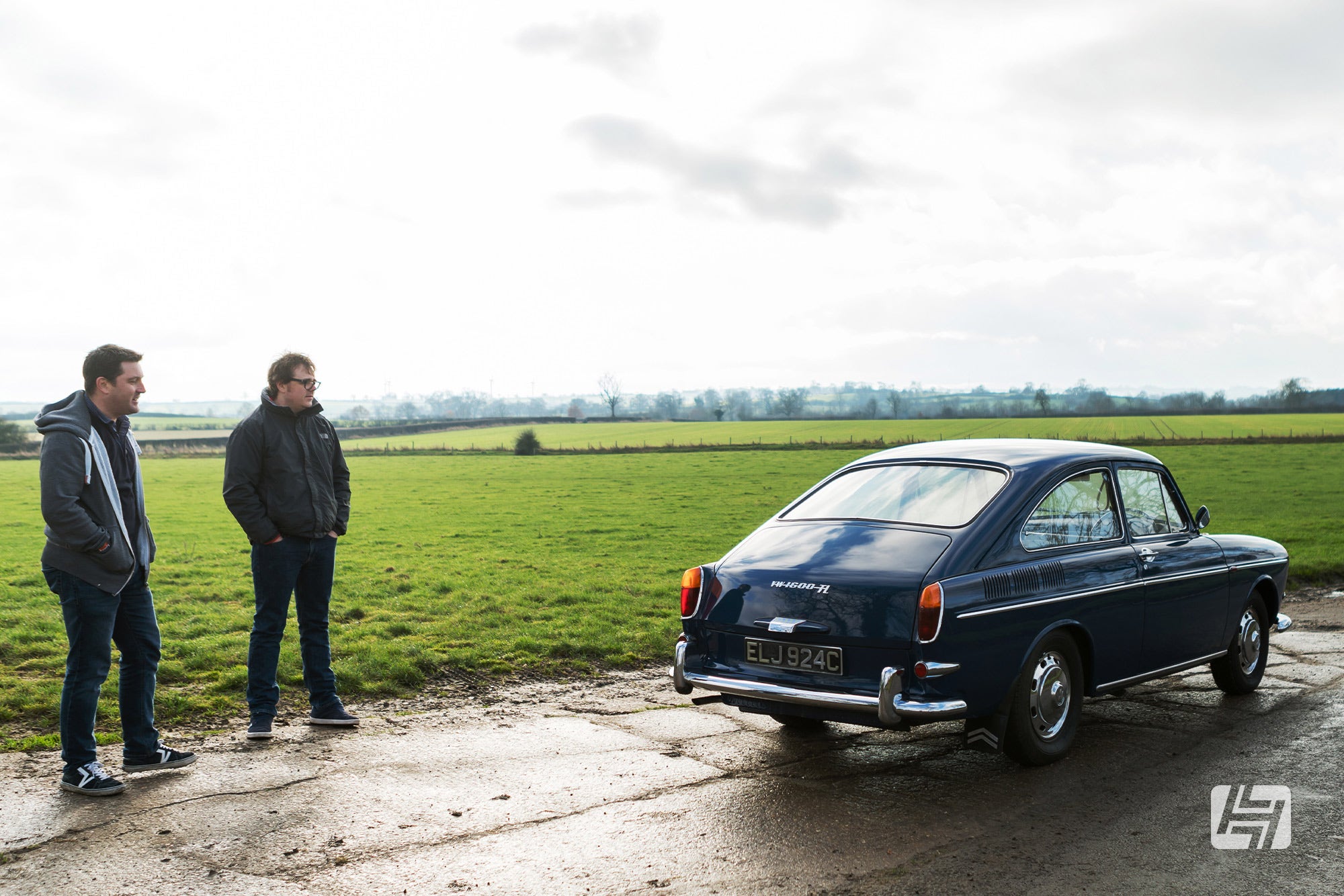