Beetle Aircooled VW
No comments
"Let’s do a VW Beetle photoshoot in your warehouse," said Nick from NWVT. “We’ll do it in the dark and I’ll light paint it” he followed. Having seen some previous cars Nick had done, we just had to let him have a go. Here is our Lights Out VW Beetle Photoshoot, originally featured on our VW Heritage blog in 2018.

It couldn’t be any old VW Beetle though. There needed to be a reason for picking a particular vehicle to pose for us. In fact, we didn’t just pick one, we spoilt ourselves with two, and the cars, well, they were built using our parts, and belonged to two long-standing members of the Heritage Parts Centre team. 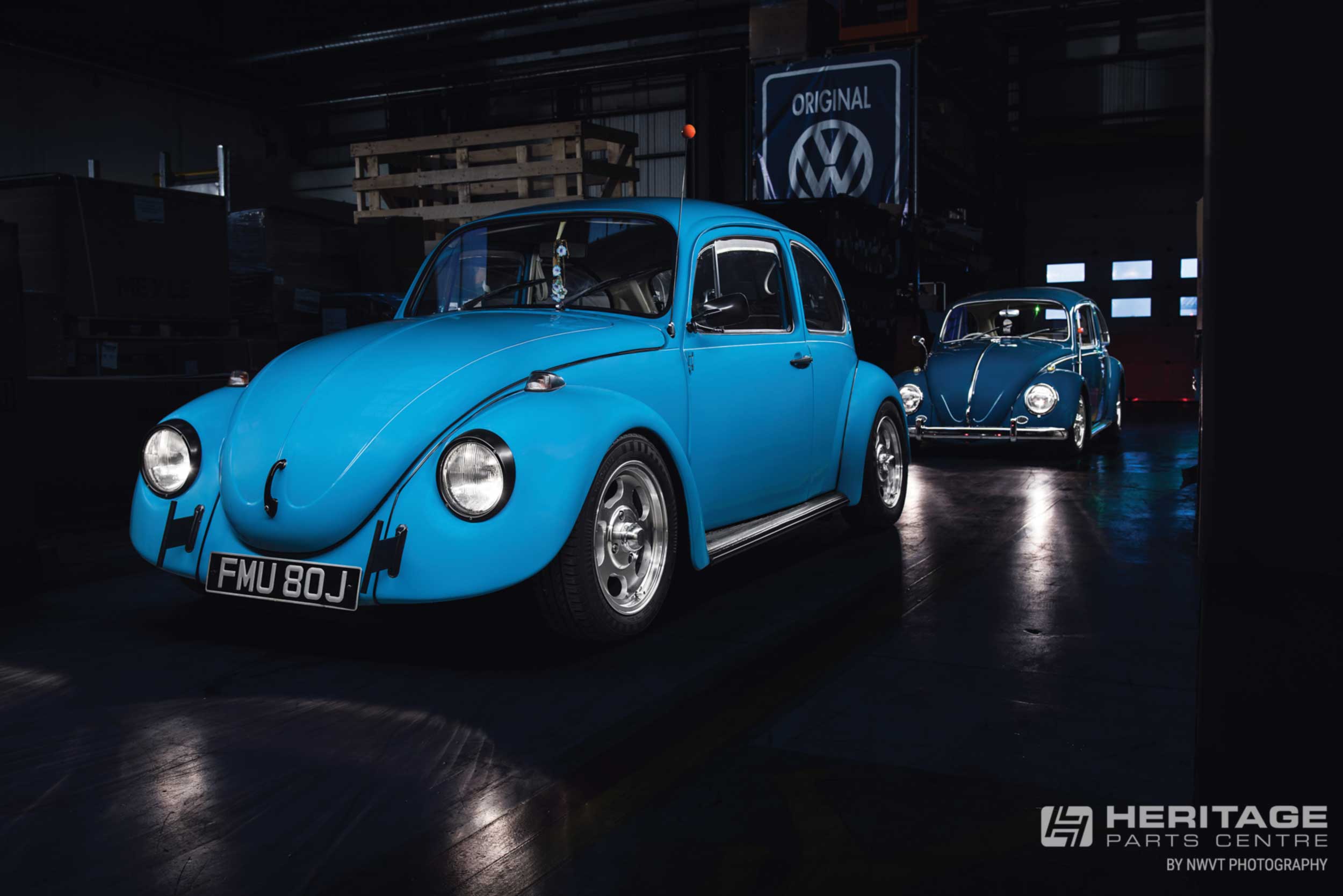 When the lights go out…

The plan was simple. Nick would come over for one of our Heretics meets. We’d hang around and enjoy the meet, catch up with friends, and then as the night drew in and hometime approached, we’d flick the lights out in the warehouse and let him work his magic. Watching Nick in action it’s hard to get a grasp of what the finished article could be; until that is, he flashes up a quick mock-up on the screen of his Nikon, and our jaws drop. In a space that’s so dark a camera phone struggles to capture anything, he picks out the details of each vehicle with precision. 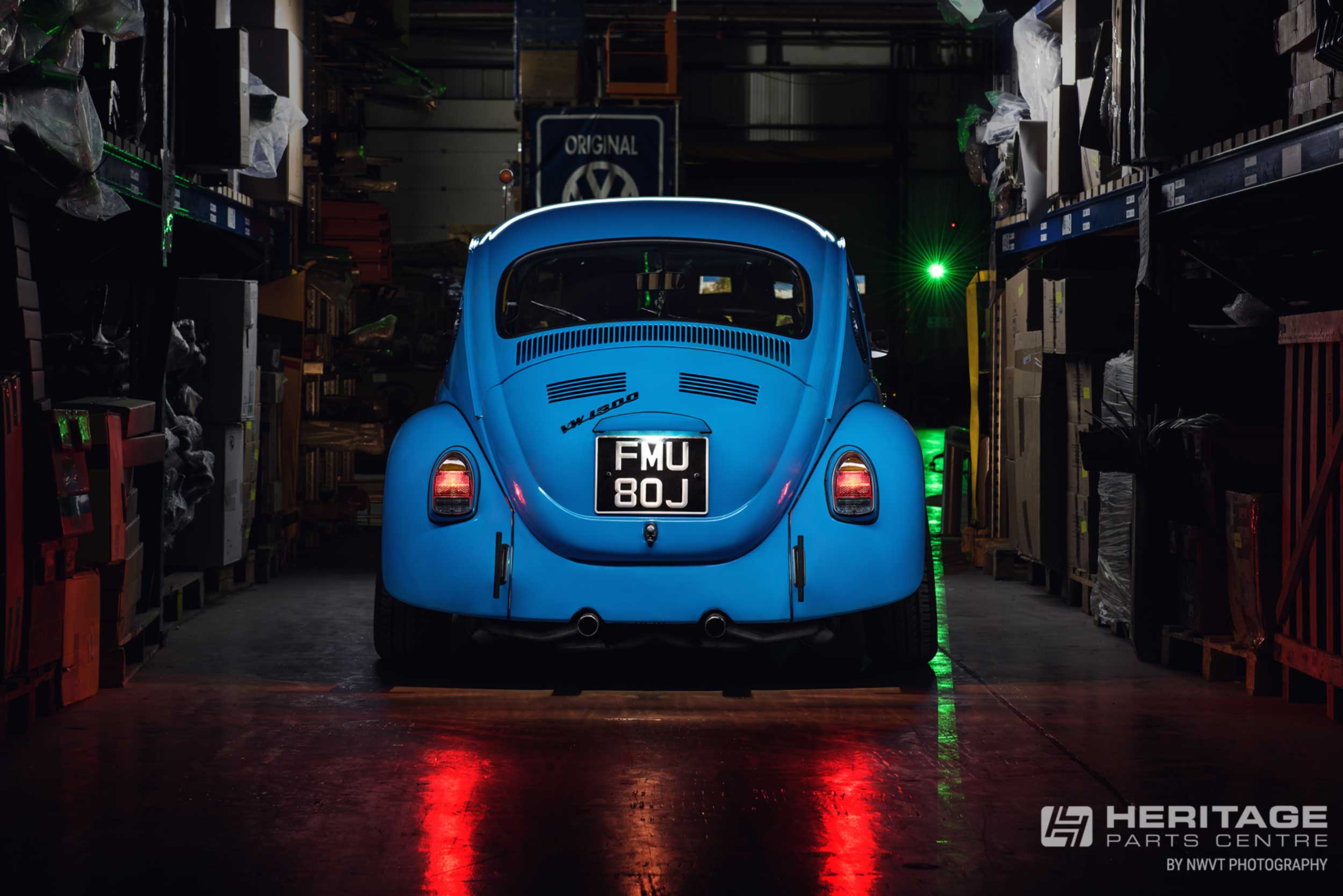 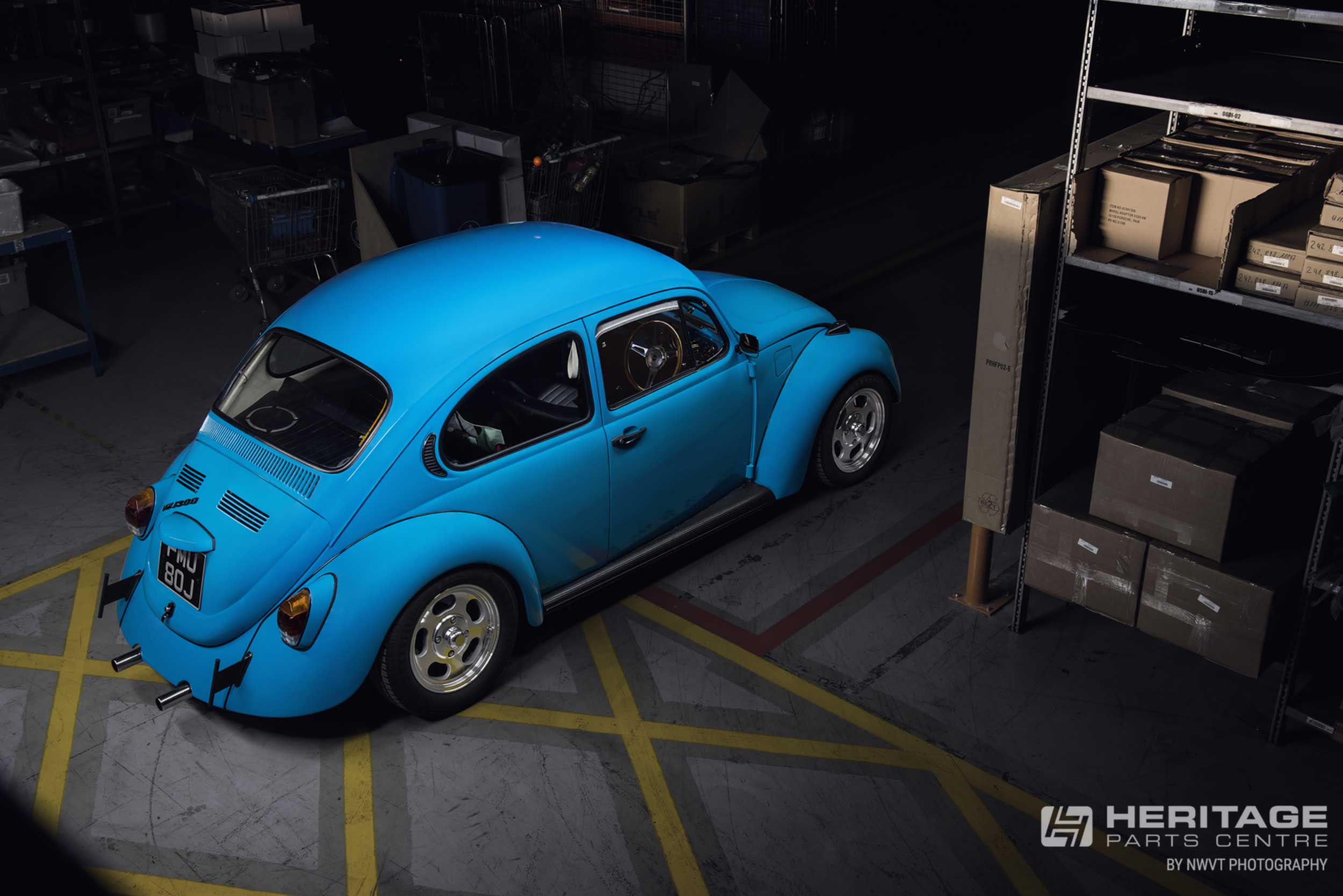 This car belonged to Jo, our Senior Product Specialist. Jo worked at Heritage Parts Centre for more than ten years, and although she is no longer an employee she'll always be part of the Heritage family. Starting in our sales team, Jo’s expertise in all things aircooled was enjoyed by staff and customers alike, and her specialist subject of Split Screen buses led her to curate all the content for our Split Bus catalogue on a number of occasions. Jo and her husband Martin also own a particularly lovely ’58 Split bus with Devon interior. 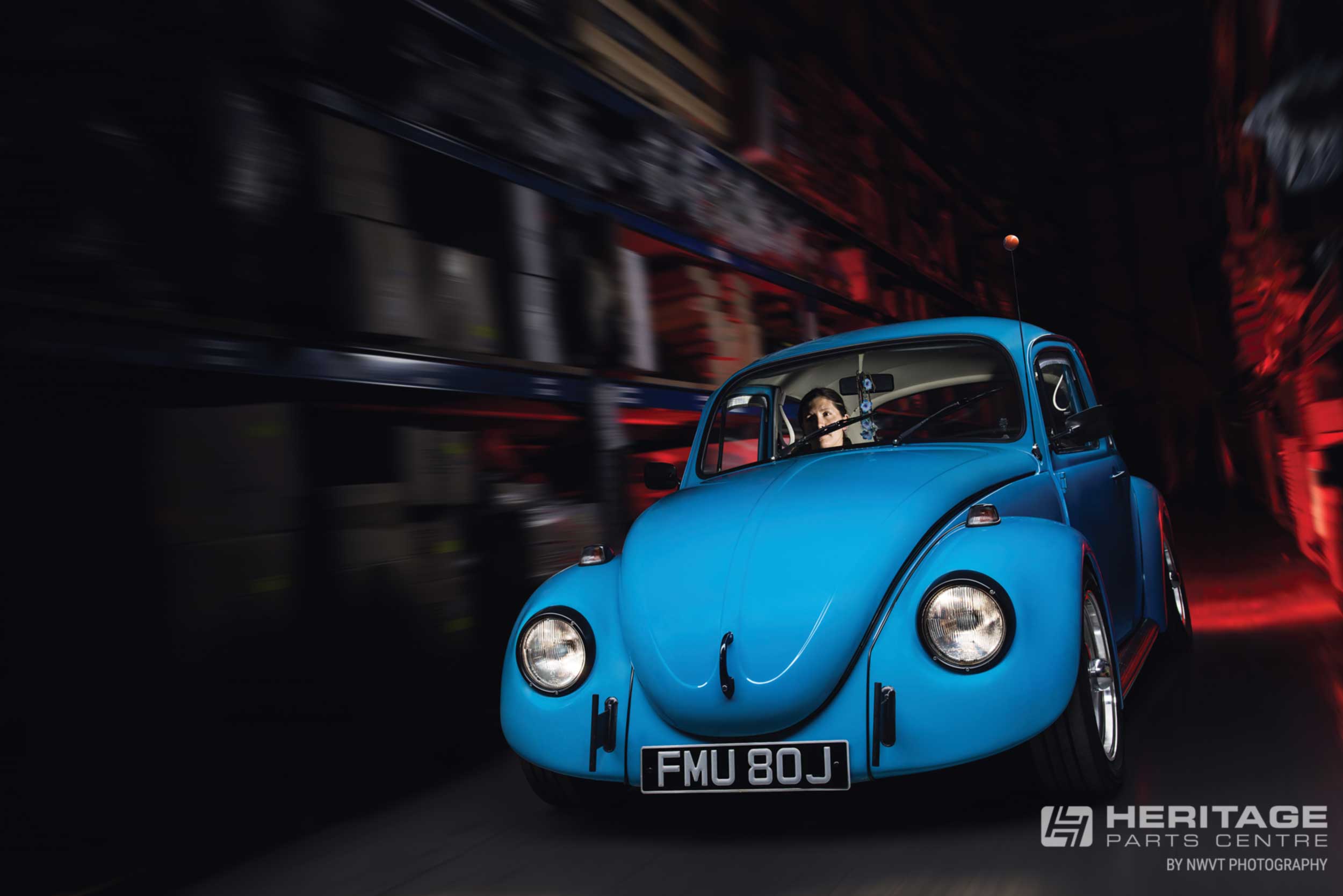 In the blue corner…

The car itself was bought as a rolling project 5 years ago and built up by her and Martin (before their little ones came along). Keen kayakers, the colour was matched to Jo’s paddling helmet rather than picking a colour from the usual paint charts. Rolling on SSP Slot Mag wheels, the stance is taken care of with an adjustable front beam, and a quartet of KYB shocks. Propelling the bug along is a 1679cc motor running twin 40 Dellortos coupled to a CSP exhaust, and an OE disc brake conversion makes sure it comes to a halt when required. Inside, a set of black TMI seat covers and door panels in black vinyl offer their compliments to the lairy hue adorning the flanks outside. Keeping her bug pointing in the right direction is a classic Mountney woodrim wheel, and gear changes are a thing of pleasure thanks to the Vintage Speed Shifter. As mentioned above this isn’t Jo’s only VW. Between her and Martin they also own a Split Bus, a T4 and a ‘Berrien Warrior Sand Rail Buggy’ which is awaiting assembly from parts left over from a Baja they broke …It’s fair to say they’ve got a thing for Volkswagens! 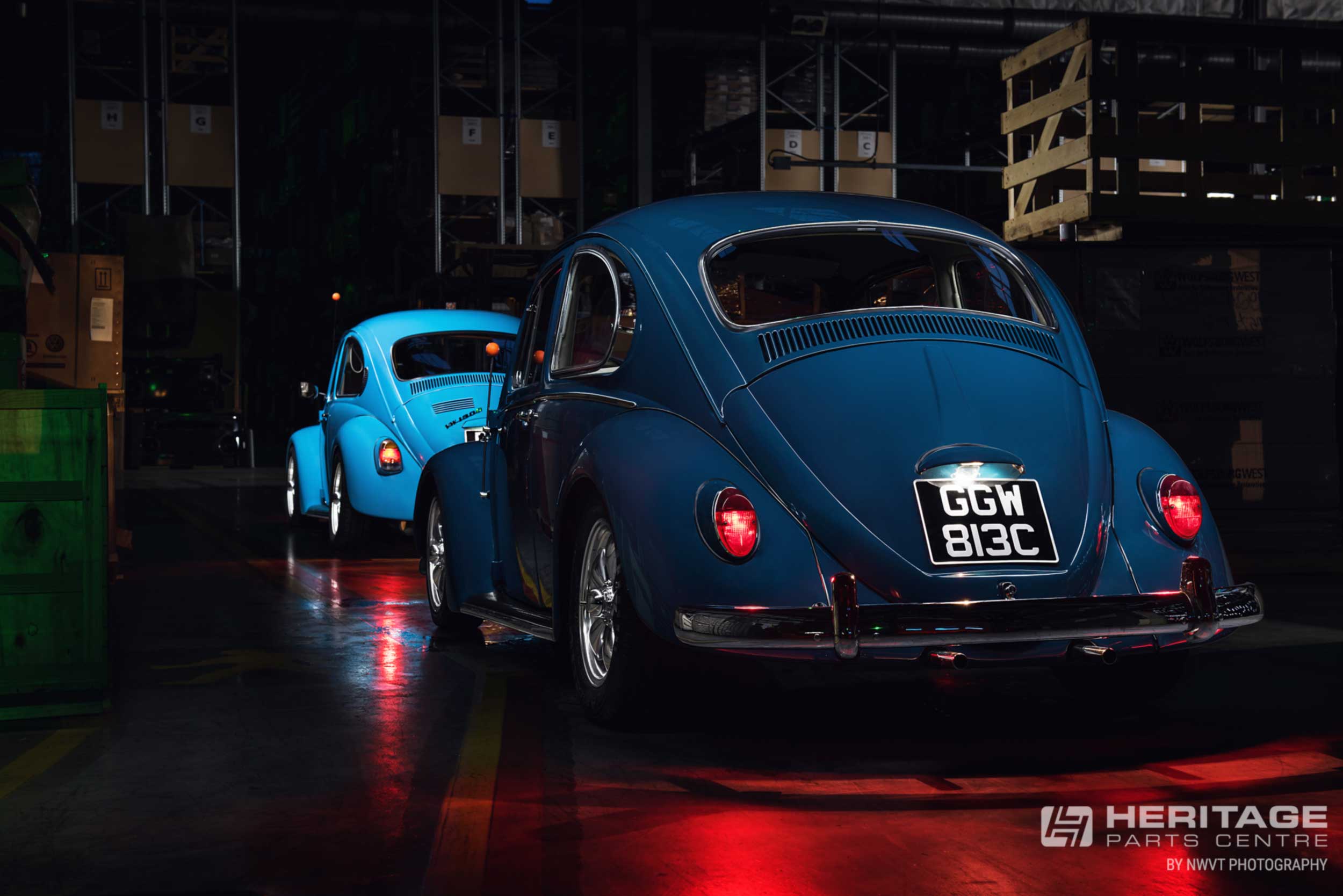 Our second Type 1 belongs to Dave, our in-house web designer for well over a decade. Dave has been driving VW Beetles since he passed his test back in ’99 and whilst he took some time off from aircooled ownership to drive a string of water pumpers (Golfs, Corrados and a 20vT Ibiza to name a few) we managed to twist his arm and get him back working on something old again. 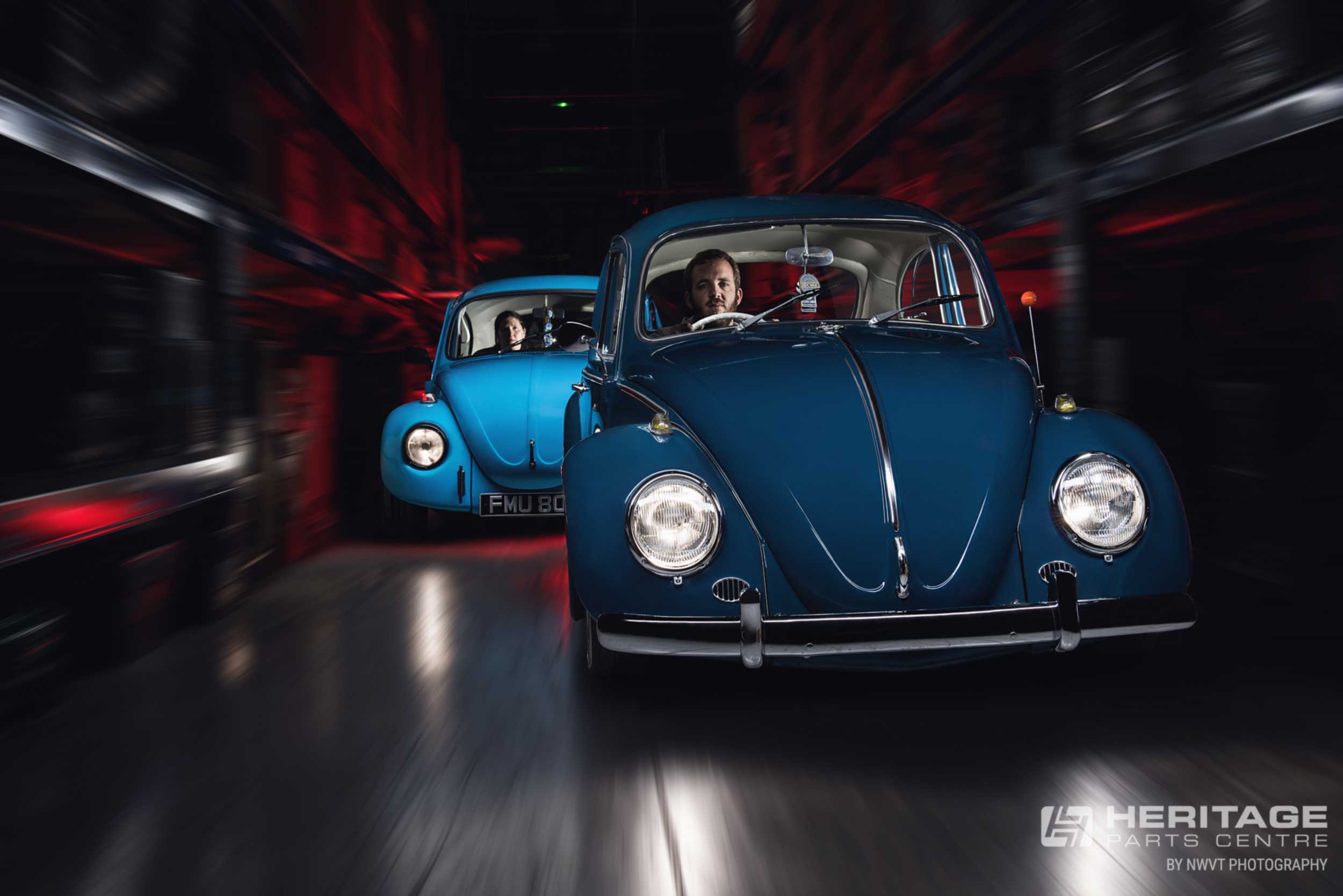 Back in a Bug

Welcoming him back to what he knew best was a 1965 Sea Blue Beetle, a car he’d technically owned since school but it had been parked in a garden for 15 years. Sadly after getting it home and starting to strip it down, it was deemed beyond economical repair. In the end, Dave picked up this identical unfinished project a year later, and his garden bug lived on by donating parts to help complete it. 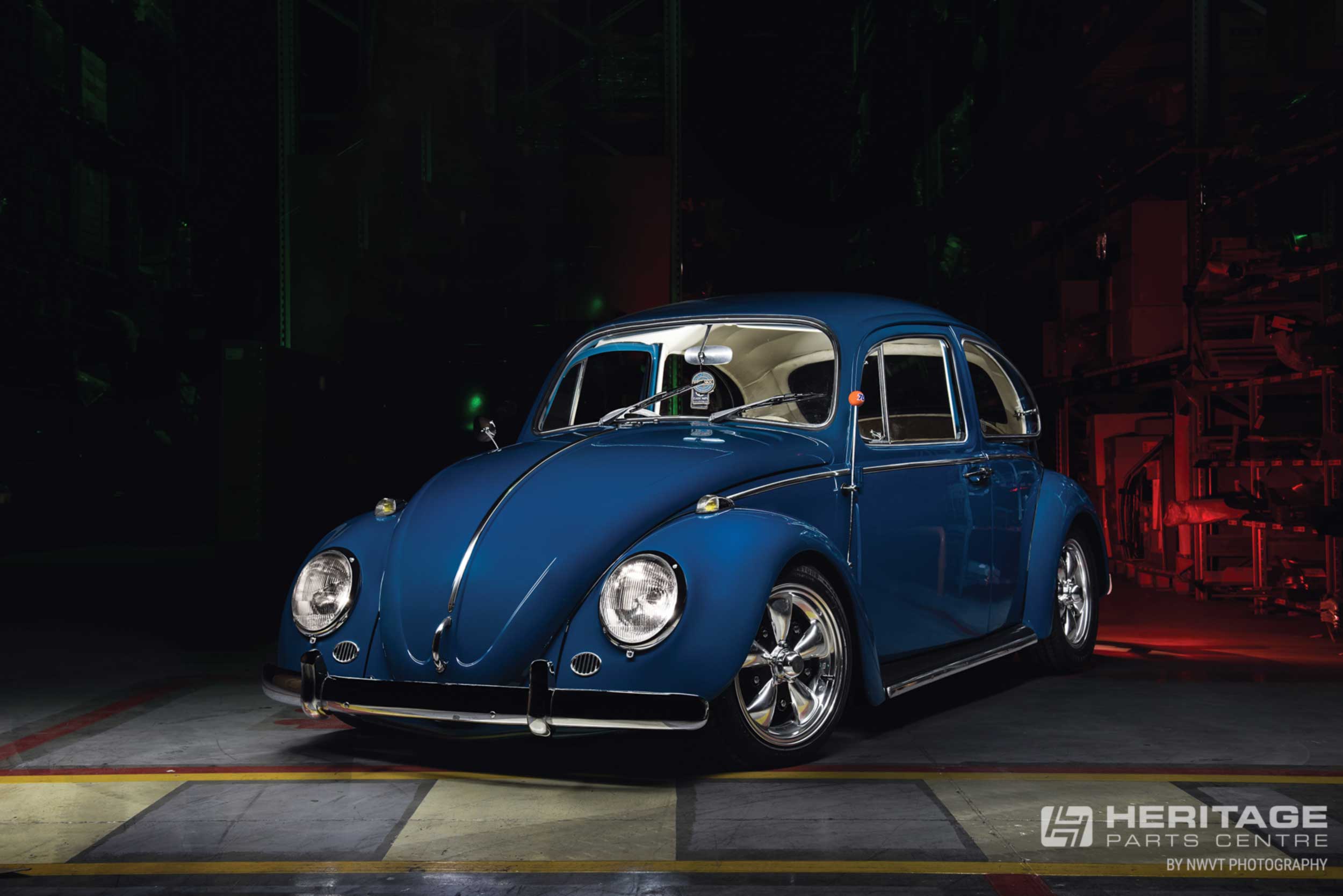 Since Dave has had this one on the road it’s been treated to a full repaint, a complete TMI interior retrim in a fetching vinyl and tweed combo, and rolls on a set of custom detailed SSP GT5 alloys. After a string of sporty motors, it now potters along pretty happily with a 1600cc twin port engine, mated to a 1500cc gearbox. The icing on the cake for Dave’s project, apart from featuring in numerous Heritage Parts Centre adverts of course, has been a full Volksworld magazine feature. He also had the car displayed in the Esher Hall at Volksworld 2017. If you liked these photos, then please check out our night time Bay Window photo shoot that we also worked on with Nick from NWVT. It features more light painting goodness, and of course a cool VW! Andy
9 months ago
Comments
Leave your comment
Top